The Truth about Soundproof Door Sweeps

The Truth about Soundproof Door Sweeps

Have you ever sat near a door in a room where you could feel the air rushing through the gap under the door panel? Or maybe you’ve heard the kids running around the house and turned to check that the door is actually closed? A closed door may keep people and pets away, but if there are gaps at the bottom or around the perimeter, it will still let in noise (and drafts).

In a perfectly soundproofed world, all doors would be solid core and form a perfect seal against the frame and the floor below, but we don’t live in a perfect world. For homeowners, apartment dwellers, and business owners who have to live with an imperfect door seal, there are DIY solutions to turn down the volume and minimize drafts.

Have you ever sat near a door in a room where you could feel the air rushing through the gap under the door panel? Or maybe you’ve heard the kids running around the house and turned to check that the door is actually closed? A closed door may keep people and pets away, but if there are gaps at the bottom or around the perimeter, it will still let in noise (and drafts).

In a perfectly soundproofed world, all doors would be solid core and form a perfect seal against the frame and the floor below, but we don’t live in a perfect world. For homeowners, apartment dwellers, and business owners who have to live with an imperfect door seal, there are DIY solutions to turn down the volume and minimize drafts. 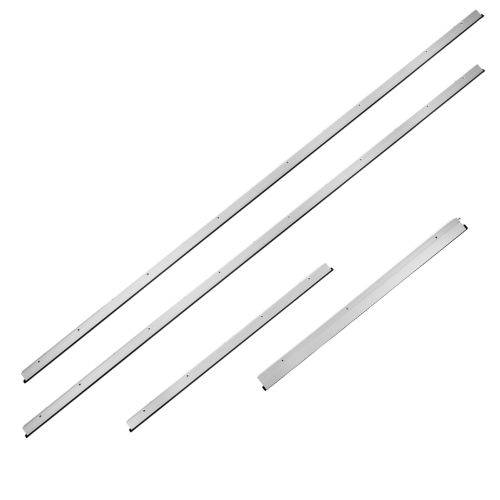 What is a Door Sweep

A door sweep is a product that you install on the bottom of your door to close the door sill, and is commonly made of fabric and rubber.

Door sweeps are one of the most common fixes for a drafty door. When attached to the door bottom, a sweep creates a barrier that reduces airflow through the gap. Alternatively, many exterior doors have what’s called a “sill,” which basically accomplishes the same thing but instead of being attached to the door panel is at the bottom of your exterior door frame. A threshold would then sit on top of this sill. While sweeps and sills are great for fixing drafts and stopping thermal transfer, both are not so great at reducing noise. We’ll get to why shortly.

It takes a pretty significant volume of air to change the temperature of a room. For example, in a large bedroom, a tiny gap in a window frame, say less than the width of a human hair, won’t make a noticeable difference in the room’s temperature as a whole, even on a very cold day.

That’s why standard door sweeps are so effective at insulating, because while they may not form a perfectly air-tight seal, it’s enough to reduce the movement of air to a less noticeable level. If the air isn’t moving from one room to another, neither is the heat. But sound doesn’t work like that.

Sound is a wave, and it tends to behave more like water in that it finds a weak point and “leaks” its way through the gap. So for our purposes, soundproofing is a lot like waterproofing. We like to think of soundproofing a room like building a pool. If you don’t have a perfect seal around the bottom and sides of the pool, water leaks out through the gaps, cracks, and seams. The larger the leak, the faster the water rushes through.

Sound works the same way. Even the tiniest gaps in a door, window, or wall can allow sound to escape as though there were nothing in the way at all. A small glass window in a solid brick wall, for example, can reduce the noise blocking effectiveness of the wall by nearly half. Effective soundproofing just requires a greater attention to detail, which is why insulating door sweeps, while better than nothing at all, aren’t great at soundproofing.

The short answer is, not very well. Door sweeps block sound to a minimal level, the best you will get is up to 4dB noise reduction. Door sweeps are much better for thermal insulation and draft reduction between rooms.

Expected Sound Reduction of 0-2 dB: Fabric door sweeps, sometimes called draft stoppers, may seem like they would reduce noise transmission between rooms, but they’re actually quite bad at that. The fabric and foam materials used to make these door sweeps aren’t dense enough to block sound, and they often don’t fill the gap under the door anyway. Some can’t even stop a draft, much less a sound wave.

Expected Sound Reduction of 1-4 dB: Often times you will see these used on a soundproof entry door. Because of their density, rubber door seals are better at stopping sound than fabric door sweeps, but they are still not great. Because they’re made from a solid rubber strip, a door seal bottom can’t make even contact unless the floor is perfectly level. If you’ve ever played with a ball in a room with a hardwood floor, you know that almost no floor is truly level.

Plus, in order to make a door seal soundproof, it has to exert positive pressure against the floor - that is, not just lay against it, but push firmly against the floor to create a seal. Standard rubber door seals just can’t create the amount of pressure required, without also making the door impossible to open. And if you can’t open the door… why is it there again? Might as well be a wall. 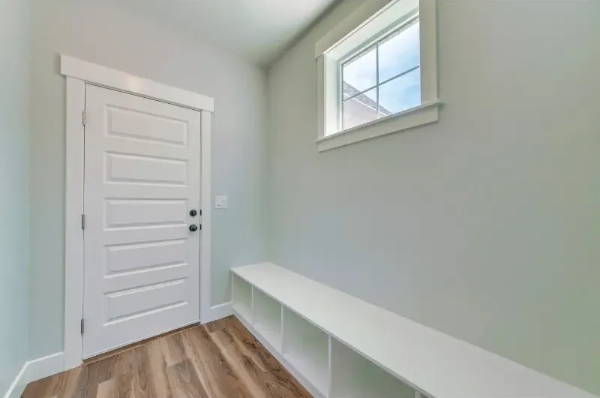 Okay, if regular door sweeps aren’t the answer, what is? To start, if you want to soundproof a hollow core door, you should always upgrade it to a solid core door. Hollow core doors are not very dense (they’re hollow!), and so they’re too lightweight to effectively block sound. Once you’ve confirmed the door is solid-core – nice and heavy – now you have a good base to apply an effective soundproofing treatment. If you are want a soundproof bedroom or soundproof home office, then there are a few options that will give you a genuinely soundproof door.

Unlike standard insulating rubber door sweeps, the soundproof door bottoms that come with our Sound Lock Door Seal Kit deploy when the door is closed, exerting positive pressure against the floor. When you open the door, the under-door seal sound blocker disengages and retracts, so it doesn’t cause damage to your floors or the seal itself. It may help to think of the mechanism like a turtle poking its head out of its shell. Or just watch our video where we show how the seal works.

The seal deployment mechanism is unique, too, in that it uses a teeter-totter movement to make even contact across the floor, even if it’s not perfectly level. The bottom seal in our Sound Lock Door Seal Kit is the best way to make your interior door sweep soundproof.

Under-the-door soundproofing does no good if there are still gaps around the other three sides of the door, between the door panel and the jambs. A truly soundproof door seal has to be sealed all the way around to work.

That’s why our Sound Lock Door Seal Kit includes three more door silencer strips to go around the whole door to go along with that awesome bottom seal. The full door soundproofing kit allows you to seal up around your entire door frame. Maximum sound reduction requires filling in all the gaps!

Of course, a soundproofing seal is only as good as the door itself, and if you have a hollow core door, you’re wasting money trying to seal the edges. You can buy a standard solid core door, but if you need a perfectly soundproof room, our STC 56 Sound Lock Door is your best bet. This wood door is as attractive as it is soundproof, and a common choice for recording studios, universities, and other high STC applications.

Questions About Your Soundproofing Project

If you want to make your door seal soundproof, you’re going to need more than just a standard insulating door strip. Give us a call to talk to our soundproofing experts. We can help you find the right soundproofing solution for your unique needs.